It's Thanksgiving this weekend in Canadaland and tomorrow I'm going to my sister's place to stuff my face with whatever she decides to make. Whatever it is, it will be delicious as she's an excellent cook. I've been reassured that there will be pumpkin pie. So I'm very... thankful.

In fact, I'm so thankful and this being Thanksgiving, I've decided to give my sister and her dude a special gift... 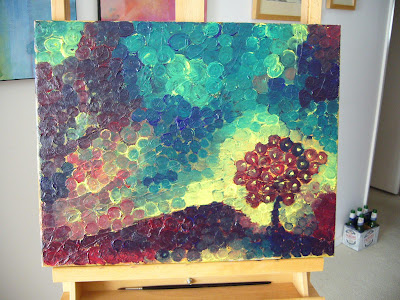 Horrific, ain't it? Hehehe... it's one of my uglies, painted during part of a painting class that focused on making an ugly painting on purpose (to get over 'trying to paint a perfect painting' phobias). I'm going to finish the edges of the canvas, sign it and name it on the back (like a real painting would be) and wrap it up and give it to them in feigned sincerity. And then watch them squirm in polite horror when the open it! :D :D :D Cruel, eh? Oh God, I can't wait!!! :D

The other day I was grocery shopping and turned an aisle corner and witnessed a man taking (what I now believe to be) clandestine photos of a girl/woman with his iPhone (or whatever).

It took me a bit to realise what I was seeing... but yes, some man in I would guess his forties (my age) was holding his iPhone down at his side, pretending to be buying milk, all the while taking 'upskirt' snaps of some girl/woman who was dressed in a mid-thigh length skirt.

Now, I'm no prude and I try to not jump to conclusions. And although my first reaction was, 'ewwww! perv alert! perv alert!' I tried to see other possibilities: 'maybe this is a couple playing sexy games in public?' or 'maybe this is a semi professional photo shoot?' But the more I watched (while trying not to be obvious), the more I came back to my initial reaction: perv!

Alas, it was a busy grocery store, I was busy doing my thing and I was confused and shocked by what I had just seen. I didn't really think it all through until later and of course I'm now kicking myself for not at least warning the girl/woman that some perv was upskirting her.

It's really stuck in my head though: was that a crime? what are the ethics involved here? should I have called the cops? if she was an adult, is she fair game just being in public? what if she was 14? does that make the pervs photos child porn-ish? and what responsibilities does a witness of this carry, if any?

After, much thought, a conversation with my friend Simon and a google session, I've decided to phone the local police and ask ... just haven't quite worked out what to say and ask. Watch this space.

OK, I am probably behind the times here but after about a month or two from starting, I've just finished reading the 'Millenium Series' by Stieg Larsson:

... and I've paid a nasty price. My 'sleep hygiene' (as they say) is all fucked up; I feel jet lagged and I bounce between having oodles of energy to turning a '15 minute nap' into a three hour snore-fest.

Seriously! I am normally very regular with my sleep. Asleep by 10-11pm and up by 6-7am and very much a morning person. I wake up full of energy (and gradually turn to mush by 9pm). So staying up repeatedly until 2am reading these damn page turners as turned me right upside down!

But wow! I thoroughly enjoyed the series. Very interesting plot, and sub plots, and great characters. I mean, how can you not love Lisbeth Salander? ... and not develop a crush on Kalle Fucking Blomkvist?

Oh, and I've watched the first two films (the Swedish ones) and I'm planning on watching the third this weekend. The first two were very good. Here's the trailer for the third:

I'm also looking forward the American version of the first film; the trailer looks excellent although Salander will always be the Swedish version for me, I think. Still, the Americanization of a good film looks very promising!:


And while searching for the trailer above I found the following clip. It looks like it's probably from a Swedish comedy show and although it's entirely in Swedish and I have no idea what's being said, I find it very amusing. People who've read the books and/or seen the film would too, I think.

I am now going to bed with an algebra text book and hope to be asleep by 9pm!
Posted by ms toast burner at 7:42 PM 1 comment:

I am going to do this!

I happened upon the 31st annual Terry Fox Run/Walk/Wheel/Hop/Cartwheeling today. I completely forgot about it this year and hadn't heard anything in the local media (bad Marnie) but I cheered on the participants and soaked in the good atmosphere. It was nice.

Later in the day, I returned to the area where the run had been in the morning. All the signs, banners, etc had been taken down. There was no sign that there had been hundreds of folks there just hours earlier. I slowly drove by the Terry Fox statue and noticed that there was a single wee bouquet of wildflowers resting at his feet... 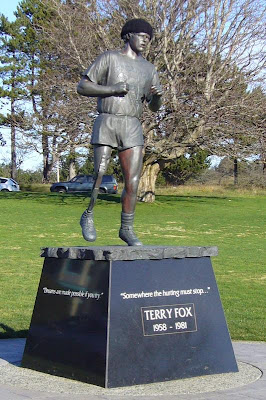 A pic of the statue taken on a cold day last winter...
see the toque? ;-) Folks look after Terry.

The poignancy of those delicate lone flowers contrasted with the morning's festivities absolutely floored me and I had to pull over for the tears. The 'Marathon of Hope' run is one thing, but the death of an individual is another.

I'm not entirely sure I understand why, but Terry Fox stirs some of my more profound emotions and has so since I was about twelve. This short video, accompanied by a Stan Rogers song, dissolves me to a puddle.

But I don't want this to be a sad post because really The Terry Fox Run has raised about 500,000 million dollars for cancer research and that is fucking fantastic.

I'll be out Fox Trotting next year and I've already marked it on next years calendar so I don't forget! Until then... here's some baby foxes and their doggy stepmom. She doesn't show until half way through but it's a lovely video et c'est tres francais! You can click the wee 'x' in the top right corner of the blue box to remove it - annoying!

Shake, Rattle and I didn't feel a thing.

I just sat down here at my computer for a bit of a coffee (iced coffee, mmmm) break and brought up the Beeb to catch up on the news and the words "Quake hits off Vancouver Island" right on the front page sort of grabbed my attention.

A magnitude-6.4 earthquake has hit near Vancouver Island, Canada, the US Geological Survey (USGS) says.

However, no tsunami warning has been issued.

The closest major settlement, Port Hardy - with a population of over 5,000 - has received no reports of damage caused by the earthquake.

Kinda odd to read a foreign news site and read about such a local news event that I should have noticed! 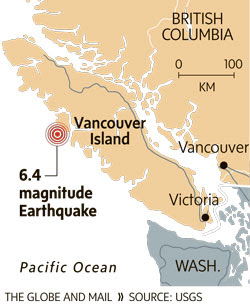 But it's true, I didn't feel a damn thing!

Understandable really, living in a wood-framed structure, you get use to it wobbling whenever a big truck goes by so you just sort of tune that out. And I'm a bit spaced out with the ol' PMS so maybe that lightheaded feeling I felt was actually my brain momentarily jiggling like seismic jelly.

EDIT: adding... Here's how it was reported this evening on the local evening news.

Good reminder though; we're right on a fault line part of the 'Ring of Fire' and best be prepared and all that. LOL! Like a windup flashlight is going to save my ass when the condo above me decides to meet the condo below me. Sigh...

No sense worrying about it. Crank up the volume and let's dance!

I have an existential map. It has 'You are here' written all over it. -- Steven Wright

Someday we will go,
pack up all we know.
Climb inside,
go for a ride.
Nothing left to hide.

It doesn't change a thing.
Everything you bring,
is all inside,
all open wide.
Nothing﻿ left to hide.

Webcam at Dallas Road and Cook Street (if this works?)

How to become mindfully aware of your nose. :-)